Established in 1983, The Topcats have racked up an impressive list of achievements.
Check them out!!!

The Topcats in the Louisiana Hall of Fame

On June 12th, 2005, The Topcats were inducted into the Louisiana Hall of Fame! The induction ceremony took place at Boomtown Casino where The Topcats were the first of numerous acts to be inducted for 2005. The band started out by playing a power packed, forty minute, set to a packed house. The response was amazing! The guys brought the house down! After their set, Lou Gabus, the president and founder of the Louisiana Hall of Fame's Entertainment Division, presented David, Buzzy, Pat, and Rob each with personalized certificates of induction! The whole ceremony was extensively photographed and video taped, so if you were not able to attend the presentation, photos and video will be available in the future!

The guys in the band are extremely honored and proud of this remarkable achievement and wish to first thank their families, who perhaps make the largest sacrifice for this kind of success! Gig after gig, day after day, weekend after weekend, year after year, and decade after decade, they stick by their husbands and fathers! The band also wishes to give a special thanks to Frank "Biddy" Robert, the band's one-man super crew! Frank has been driving the truck, setting up and tearing down the show, doing sound and lights for well over 15 years now! These past years without him would have been difficult to say the least! Last but not least, the band also wishes to thank Sal Candilora and the former members of TQ & The Topcats who, from the early 70's until 1983, laid the ground work for The Topcats' present day success. Sal, who sang with The Topcats until 1987, remains a special part of The Topcats. Check out all of these previous members on the Topcats' Chronicles page.
Check out the image of David's Induction Certificate above. It's official! Signed by Mitch Landrieu, Lieutenant Governor for the state of Louisiana, and Lou Gabus, the president and founder of the Louisiana Hall of Fame's Entertainment Division! Click on the image to enlarge and scroll to read the fine print.

The Best of The Beat Awards

Check out the Best of The Beat Awards The Topcats have won!

During the week that preceded The Topcats' fifteenth year anniversary party, the band received considerable press coverage. The band appeared on WWL TV's morning news show, and they were interviewed live on B97 and WTIX radio. Below are images of articles that appeared in Gambit, Offbeat, and Lagniappe magazines.
Check out the image below of a full page advertisement that appeared on the back cover of Gambit magazine in the week preceding the anniversary party. The ad was sponsored by some of the band's favorite clientèle. 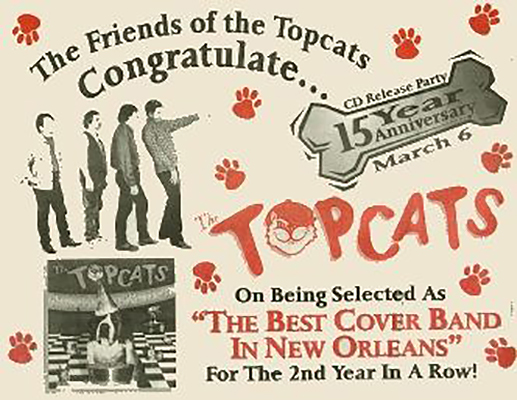